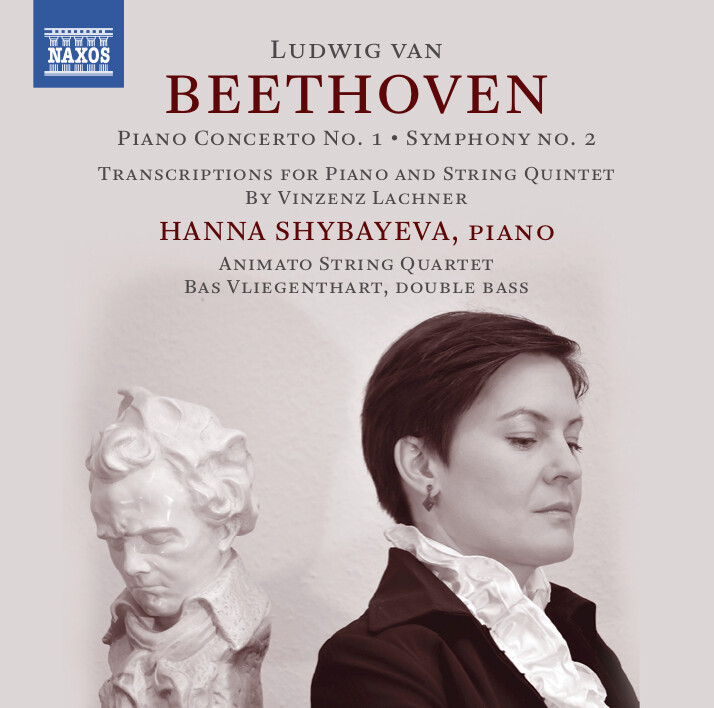 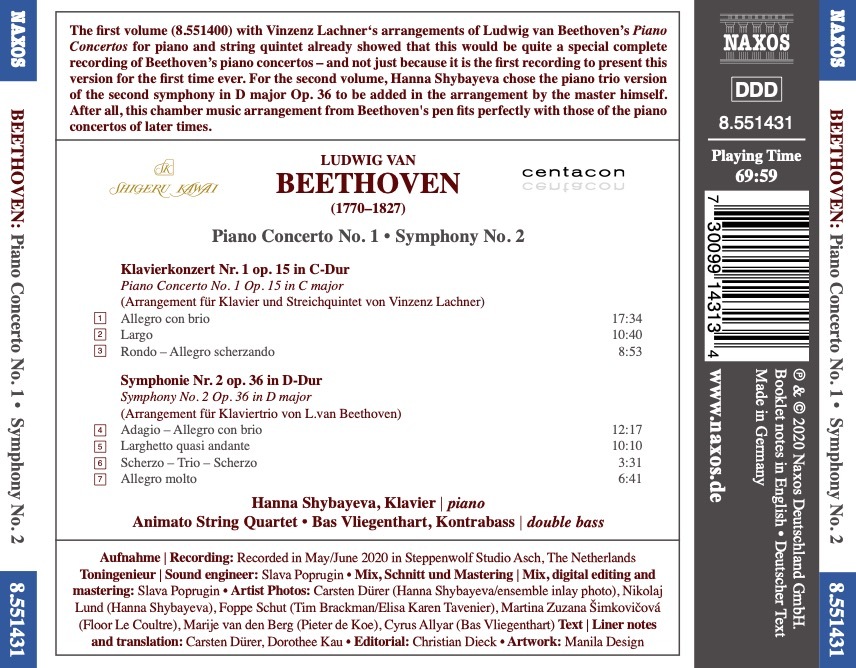 The first volume with Vinzenz Lachner‘s arrangements of Ludwig van Beethoven’s Piano Concertos for piano and string sextet already showed that this would be quite a special complete recording of Beethoven’s piano concertos – and not just because it is the first recording to present this version for the first time ever.

Those who bought the first CD with Piano Concertos Nos. 3 and 4 in this arrangement might be surprised that the second volume does not present Vinzenz Lachner’s arrangements of the other piano concertos. The reason is that Hanna Shybayeva knows only too well that the remaining three piano concertos are not enough material for two further CDs. Therefore, the second volume includes Beethoven’s First Piano Concerto and the master’s own version of the Second Symphony in D major op.36 for piano trio, a chamber music arrangement by Beethoven himself that perfectly fits in with the later arrangements of his piano concertos.

Symphony No.2 for piano trio

The Second Symphony from 1801/02 was composed at a time when Beethoven was already badly suffering from his progressing deafness as the “Heiligenstadt Testament” from 1802 makes obvious. This symphony was definitely a quantum leap compared to the first piece of this genre which was still strongly influenced by Haydn and Mozart. Accordingly, this work already contains the wealth of facets that characterises Beethoven’s distinctive features of later years and the reason why it did not attract universal praise on the part of contemporary critics. Three years later Beethoven wrote the version for piano trio: on the one hand because his original symphony was not performed everywhere and, on the other hand, because it was an opportunity to get money from a publisher, who would realise that this version could find customers in bourgeois households.

Though the critic of the magazine Allgemeine musikalische Zeitung truly appreciates the version for piano trio, he cannot resist having a dig at the work itself: ”Beethoven’s rightly famous Symphony in D […] is here presented as an excerpt – we may assume for those who are not able to listen to this very difficult work in its entirety, or for those who might not fully understand it because of its wealth of affectedly intertwined ideas or perhaps the much too frequent use of the most garish instruments, or, finally, for those who now – while recalling the delight they took in the complete performance – want to get a better overview and listen to passages which were not really clear to them at first or which they were specifically fond of. Therefore, we are grateful for this excerpt in many respects, even though one […] might have objections to any arrangements of such works as a matter of principle.” Yes, this work was definitely a novelty, a work the world of music had never heard like this before. The long first movement, however, is – as regards Beethoven – a movement brimming with love of life and euphoria. With just one theme that mostly rests on the most different conduct of parts in the instruments, it is also an indication of the fact that the master from Bonn can fill a single central idea with so much life that the extraordinary variety is brought about by the instrumentation alone. Also in the following movements – the minuet-like larghetto of the second movement, the concise scherzo with its landler-like trio (in the original version marked by the wind players) as well as the final scherzo with its magnificent dynamics as well as the brilliant extension of the sonata form – it is the conduct of parts which gives this symphony its unique character. And this is exactly what the remark about the “most garish instruments” in the review aims at.

The difficulty for the three musicians taking on the task of playing this dense arrangement of the symphony lies especially in working out all these parts that are now distributed among just a few instruments. In this arrangement the piano does not necessarily take over the part of the wind players whereas violin and cello content themselves with the original parts of the string players. No, the violin sometimes has to take over the theme of the horn – Beethoven organised the distributions quite skilfully.

Managing to bring out the symphony’s verve and wealth of expressions in this constellation is definitely quite a challenge.